Shivanna Sadanand first went to the Mavalli Tiffin Rooms (MTR) in Bengaluru 50 years ago, and has been a regular ever since. A lot changed in his life over time: He took a voluntary retirement from being the private secretary to former Congress minister HM Channabasappa, joined his family business of iron and steel; raised, […]

Punjab on a platter It started with a moment of curiosity. Two years ago, I was invited to speak at a gathering of alumni from Delhi’s Catering College (known within the trade as the Pusa Institute because of its location). As I looked around at the audience, I noticed that everybody who mattered in the hospitality sector seemed to […]

The History of Tandoori Chicken: Infographics Originally a Punjabi preparation, it is a soft, succulent dry dish made by slow roasting spiced and marinated chicken in a clay oven called tandoor.History-Sounds unbelievable, but historians are said to have found the first evidence of a meat preparation which looked like Tandoori Chicken in the ruins of Harappa. -Tandoor like clay ovens and […] Cooking is like the performing arts. To be a good cook, one must first be an artist. Then, and only then, can you become a chef. Great chefs ‘play’ with their dishes in the same way that an artist ‘plays’ with his canvas – preparing a visual extravaganza for the mind to digest. That explains […] The legend in Bollywood playback history was started with Kundan Lal Saigal but well before him, another legend from the foodies’ world named Kundan Lal Gujral started his tryst with the destiny with tandoori in Chakwal, Undivided Punjab (now in Pakistan). He was the first in Peshawar to dig a tandoor right in the middle […]

The Taste With Vir: The Tandoori Chicken is a Punjabi bird and we should say it loud I wrote last week in Brunch about the battle over the invention of Butter Chicken. It is not surprising that the piece generated so much interest – Delhi is a Butter Chicken-crazy city. But I learned three things from the responses. First of all, we have done such a bad job of recording the history […]

The Twist In Moti Mahal He never ventured into the kitchen as a child, so all those theories about getting your children to become future chefs by learning cooking early and smearing themselves with pancake and muffin dough, or even a plethora of masalas, seems to hold no water, at least in his case. In fact, Monish Gujral, CMD, Moti […]

The modern dal makhani was invented by Moti Mahal 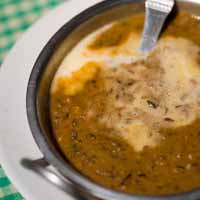 If the tandoori chicken and the butter chicken (and its European relative, the chicken tikka masala) are the most famous Indian dishes in the world never to be cooked in Indian home kitchens, then there must surely be a vegetarian candidate for the same category.    I think I have found it: it is the black […] I was in Bangkok last week and sought out my favourite Thai food: chicken and rice. The dish is related to the better known Hainanese Chicken Rice, which consists of slices of poached chicken with flavourful white rice, served with clear chicken soup and condiments. This dish, though theoretically a specialty from Hainan in China, […]

The Global chain of Moti Mahal Delux Tandoori Trail restaurants , famous for its authentic tandoori and mughlai cuisine today launched 5 variants of “Ready to Eat” packaged foods. With their extensive experience dating back to more than a decade in the Indian and international market, Moti Mahal Delux now introduces ready-to-eat North Indian vegetarian […]